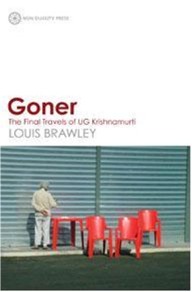 About the Book:
Louis Brawley met UG Krishnamurti in 2002 and spent the following five years travelling with him in the USA, India and Europe keeping a record of this remarkable non-teacher and documenting his own inner struggles as his ideas about life, love and Enlightenment were constantly tossed around and demolished. Louis fell into the role of foil and sidekick to UG’s bizarre interactions with his friends and audience and, as UG’s health deteriorated, he became his informal caregiver.

Louis Brawley doesn’t use honeyed platitudes to tell the story of a sage and his devoted follower; instead he tells an often unflattering story of his own struggles and shortcomings and the dynamic uncertainties of life with a man who “tore apart everything human beings have built up inside and out for centuries.”

Goner will teach you the meaning of the phrase ‘paradoxical truth’. UG Krishnamurti gave up everything for truth, but delighted in ridiculous fabrications; he was a teacher who refused to teach, a man who mocked do-gooders but was deeply kind; he was chaste but foul mouthed, he was a man who decried the supernatural … yet there were strange coincidences around him.

“…the way he lived, his living quarters and his mode of expression were one continuous movement, a three dimensional, living book of teaching. If you were observant, you could learn from him on contact with no need for explanation.”

About the author:
Louis Brawley was born in Ohio and lived and worked in New York, where he met UG Krishnamurti in 2002. Louis works as an artist, photographer and freelance art handler worldwide – occupations which fund his travels around the world writing and recording accounts and impressions from friends of the “Raging Sage”.

“You are trying to present me as a religious man, which I am not. You are failing to comprehend the most important thing that I am emphasizing. There is no religious content, no mystical overtones at all, in what I am saying. Man has to be saved from the saviors of mankind! The religious people—they kidded themselves and fooled the whole of mankind. Throw them out! That is courage itself, because of the courage there; not the courage you practice.”
Download the Sample Text of this Book [PDF] 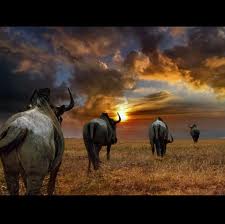 A child was never mild. The huamnity has pressed it into
‘mild’ for centuries and centuries. To be wild is the nature.“
– –

loves are dual, and they may bring and confirm more and more duels only.“
– – 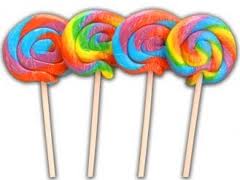 Enlightenment promises are like lollipops. And there are plenty of children hanging around it.“
– –

UG is for life 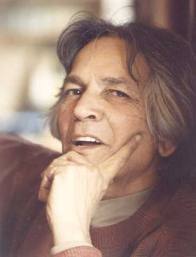 on 22 Mar 2011 thanks to the splendid hospitality extended by Mrs. Suguna Chandrasekhar and Mr. K. Chandrasekhar Babu, to mark or make ‘the 4th UG Aradhana’ event; not for UG, but for the sake of UG friends themselves, so to say.

Meetings and manthans (churnings) are always the best parts of our life. It’s not just an occasion to pay our respects or remembrances to UG, which he never wanted to happen. At least as far as UG is considered, we may take it as an occasion to hit our backs as to see whether we are living our ‘life’ in its freshness and fullness. And that’s all that we may do to UG.

An interesting part of this gathering was the varied and candid exchanges of views on the newly published book, “My mission, if there is any, should be, from now on, to debunk every statement I have made. If you take seriously and try to use or apply what I have said, you will be in danger.”
– UG
[More]The Biology of Enlightenment: Unpublished Conversations Of U. G. Krishnamurti After He Came Into The Natural State (1967-71), edited by Mukunda Rao. [More about this Book] Even though a more common view is expressed there that now UG is more approachable and reachable, as in this book UG moves on a sanguine and sane way unlike his hardcore utterances of the later period – through 1980s, 1990s and till his death-bed statement in March 2007; but for those who have really read in between the lines of this rare new book, there is absolutely no different UG – it’s the same hardcore staring UG. Only the lingo may be a little traditional and not aggressively radical, otherwise it is the same UG.

This book may be considered as the ‘essence’ phase of UG; and the later period till the physical death of UG may be considered as the ‘enforcement of the essence’ phase, where the only focus of UG was to push an individual to the dead end of the hard wall so that there is no escape and he can directly stare into the very life force on his own. It is in this second phase that UG used his own inimical lingo of slang and extreme abuse. He used the worst possible kind of filthy language, only to make us healthy so that we may ‘see’ life directly here now and ‘free’ ourselves from the dead burden of the so called hell lot of the past holy heritage and knowledge shits.

It is absurd and may not be of any use to say that UG was either against or for the traditions or holy scriptures or gurus or religions. UG’s only focus is to see that there is no space or screen between you and your life. It’s so straight and simple. But the words may again spit and split – no end there.

Another point of discussion was as to whether UG proposes or gives any ‘technique’ for arriving at the natural state. Absolutely no ‘techniques’ we find in the utterances of UG there to hang on to it. Techniques and tools may never dare to touch ‘life’. We are left entirely naked and alone here now in the life. The so called gurus, hopes and techniques may only add to more and more hurdles and blocks to life there.

For all those of us who have had the continuous hardcore doses of the UG of the later period, this book may give a sudden little soothing touch; but the hardcore UG always remains in the forefront.

(On the other day, one best and aggressive contributor of this blog, Mr. Madhusudhan D. Rao (Madhu) has had a detailed exchange with me of his ‘way of seeing’ as to whether the hardcore UG is in anyway diluted due to this new book (The Biology of Enlightement). He firmly says NO. It is hoped that Madhu may be posting his way of perceiving this new book and UG out of his own trauma and journey of life, here in the pages of this site, shortly.)

No holy or otherwise dead techniques or static shits may dare to touch the living life here now.“
– – 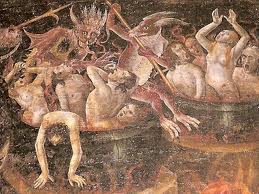 Life needs nothing, and the whole mankind is busy chasing their false greeds.“
– –

Eccentric UG
Create a free website or blog at WordPress.com.